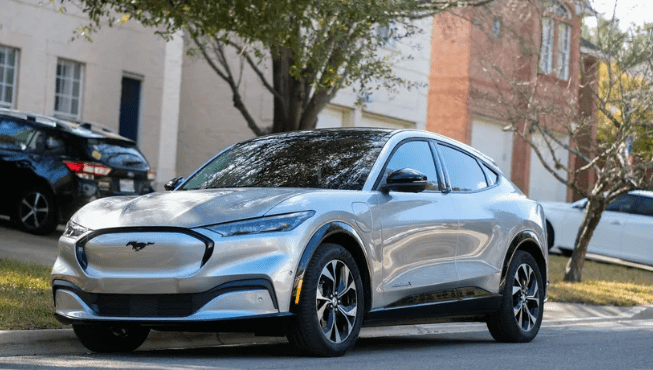 Ford stops Dealers from selling the Mustang Mach-E – Ford has issued a recall for over 48,000 Mustang Mach-E electric crossovers, citing fears that a safety flaw might render the car immobile. CNBC was the first to report on the problem.

The first fully electric vehicle from Ford. Thus, it becomes Extremely Important. You won’t find a Ford badge on it anywhere; we’ll get into what that means later. For now, though, let’s take a closer look.

First, some information. Built on a brand-new platform, it comes in either a single motor (rear-wheel drive) or twin motor (all-wheel drive) configuration, with a battery capacity of either 75 (Standard Range) or 98 kWh. It is one of the longest-haul electric cars available with a claimed range of up to 372 miles. The base model weighs just under two tons and has 265 horsepower, while the most powerful GT version, able to accelerate from 0 to 62 mph in 3.7 seconds, has 480 horsepower.

The defect concerns a possible overheating of the car’s battery high-voltage contractors, which can cause the vehicle to fail to start or lose power while in motion, according to the recall. The notification states, “An overheated contractor that opens while driving might result in a loss of motive power, which can increase the danger of an accident.” Ford claims that the problem affects 48,924 Mustang Mach-E vehicles sold in the United States, roughly half of the projected 100,000 Mustangs produced in that period. It’s the latest hitch in Ford’s mass-market electric car launch, which has helped the company climb to second position in EV sales after Tesla.

FORD SAYS THE PROBLEM AFFECTS 48,924 MUSTANG MACH-E VEHICLES SOLD IN THE US.

Model year 2021 and 2022 cars constructed at the automaker’s Cuautitlan facility in Mexico between May 27th, 2020, and May 24th, 2022 are impacted. Ford has issued a warning to its dealers, instructing them not to deliver any Mustang Mach-Es to consumers until a software update is available.

A recall has also been filed with the National Highway Traffic Safety Administration, according to a representative, Said Deep, but it has yet to be posted on the agency’s website. NHTSA is currently conducting no safety investigations, according to Deep.

An over-the-air software update will be sent “next month” to solve the problem, according to Ford. Owners of the Mustang Mach-E can also take their cars to a Ford or Lincoln dealership for a faster software patch.

“Ford has not given any orders to stop driving vehicles that are subject to this safety recall,” Deep explained.

The recall comes at a critical juncture in Ford’s electrification effort, as the first F-150 Lightning pickups have begun to reach consumers. In May 2022, Ford reported selling 6,254 electric vehicles, up 222 percent year over year and accounting for nearly 4.2 percent of the company’s overall sales volume. The Mustang Mach-E, with 5,179 cars sold in May, accounts for the majority of those sales. This isn’t the first time the Mustang has encountered a speed hurdle. Ford postponed the EV’s release until spring 2021 in order to do more quality inspections. Unintended acceleration, poorly fastened seat belts, and loose subframe bolts are among the issues that have prompted the carmaker to issue a number of recalls.

Updated at 11:38 a.m. ET on June 14th: According to a representative, the problem affects 48,924 Mustang Mach-E vehicles sold in the United States, which is roughly half of the projected 100,000 automobiles built at the time. According to an earlier version, virtually all of the automobiles might be compromised.

A remark from a Ford official about the firm not included a stop-driving message in its recall has also been added to the piece.

Updated at 12:19 p.m. ET on June 14th: This story’s title has been modified to emphasize the recall rather than the dealer notice.